In many of our communities and churches, we have territorial acknowledgements that often include a phrase about moving forward in a spirit of reconciliation and respect.

At St. Andrew’s Barrie, we share a city block with Barrie City Hall and we take Christ’s commandment to share His love in our world seriously.

“We want to be part of the healing. It begins with fostering a relationship based on respect,” said St. Andrew’s Barrie’s Rev. Joanne Lee. 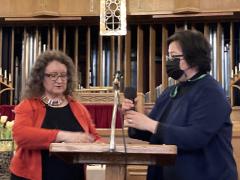 As unmarked graves at former residential schools continued to dominate the news, we felt called by God to host a series of presentations, open to the community, to further our and others’ efforts to understand the legacy, build respectful relationships and be part of the healing and reconciliation that we say we are committed to fostering.

With the second in the series taking place next Wednesday, May 25, we are looking forward to how the church can help healing. Rev. Margaret Mullin and Rev. Linda Patton-Cowie, along with Barrie Native Friendship Centre elder advisor Ernestine Baldwin, share their insights, and the series wraps up June 22 on treaties with Indigenous lawyer Roger Townshend and treaty researcher Dan Shaule.

In the first session, Lori Ransom, an ordained Presbyterian elder who now does healing and reconciliation work with the United Church of Canada, helped us understand the context, what happened in residential schools and the effects they had and continue to have on Indigenous individuals, families and communities. 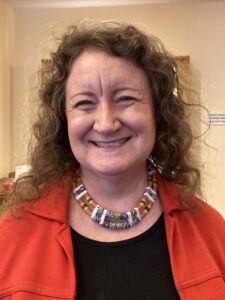 In her role as a Senior Advisor, Church and Interfaith Relations with the Truth and Reconciliation Commission, she brings insights into the trauma and the 94 Calls to Action the TRC recommended. Her inspiration is the people she has met who shared their experiences of deep childhood trauma, including a woman she met in 2007, not long after she became the PCC’s first Healing and Reconciliation Program animator.

“She, like many others I would hear in the years that followed, brought me to tears as she related what a poor mother and grandmother she had been because of her own experiences at residential schools, and she apologized to these children and grandchildren as she spoke; one of whom stood beside the survivor with her arm around her.

“The impact of the residential schools, which many these days are starting to call residential institutions, rather than “schools,” on families and communities for generations was so palpable then and at other times along the way that it can’t help but motivate me to act,” she said.

Ransom noted the residential school story begins in the 1600s in New France, when Indigenous children would board at Jesuit schools. In the 1830s, what we know as residential schools began to open, and in 1886, a federal report noted the aim of the schools was to “transform from the natural condition to that of civilization.”

In her presentation, she pointed out, for example, that children from Sarnia would be sent to a school near Sault Ste. Marie, as “it was recognized kids needed to be away from their parents to learn English or French and Eurocentric traditions.”

Imagine the communities without children and what it would feel like. Imagine the worries and pain of missing your children, some of whom never would return and those who did returning traumatized, she said at St. Andrew’s Barrie.

She suggested that any one of us can learn more by reading books by Indigenous authors, joining in local friendship centre or nearby First Nation events or learning more in the Indigenous Canada course like that offered by the University of Alberta, online and free of charge. 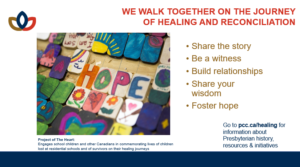 “The faith of these survivors that by going on record they could somehow make things better for their children and grandchildren and communities inspires my own faith.  I noted several times how these survivors were not naïve in this hope; they spoke about past inquiries and commissions and reports about Indigenous people and how little had been done to implement recommendations, yet they carried on with a hope that it was critically important to share their stories and advocate for change,” said Ransom.

“They said this, often, surrounded by their loved ones and it was clear that first and foremost their concern was for their loved ones’ future and the future of their people.  And yes, my own faith and understanding of what is to be Christian, convicts me that churches very much have a role to play in, and a responsibility to support, the work of healing and reconciliation.” 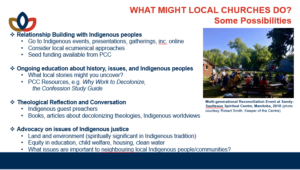 Watch the first recordings on St. Andrew’s Barrie’s YouTube channel, https://youtu.be/UXisoMeZGgM,  then join us in-person or online on YouTube at 7 p.m. May 25 and June 22. To help cover our costs, there is a freewill offering, but we are suggesting a $10 donation.