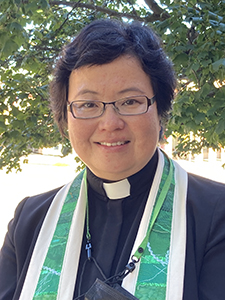 Rev. Joanne Lee has juggled studies with work and family since she was a teenager – and she’s seen how God leads us and sustains us.

Raised in Toronto, Ontario, Rev. Joanne was the eldest child in an immigrant family. Imagine “Kim’s Convenience” and you get a glimpse of what her teen life was like. After school, she’d rush to her parents’ convenience store to work, so her parents could have some down time. As she helped her parents and their customers, she began to understand the struggles and frustrations newcomer families have as they try to build a new life here.

Her dream was to be a diplomat. She attended the University of Toronto, where she received a B.A. in French translation with a minor in East Asian studies.

She taught English as a Second Language in Seoul, South Korea.  During her stay in Seoul, God drew her into ministry.  She volunteered her time at a Korean church, where she introduced an English-speaking Bible class for teens and young adults.

Returning to Canada, she obtained her Master of Divinity at Knox College, and became a diplomat for God. She came to Barrie from St. Andrew’s Presbyterian Church in Innisfail, Alberta, where she served for six years.

She and her husband, David Ahn, have two children: Robyn, a kinesiology student at York University, and Jayden, an Innisdale Secondary School student who is an avid basketball player and competitive swimmer.

Rev. Joanne is always open to new challenges.  She and her family conquered “Crypt Lake Hike” in Waterton, Alberta – one of the most thrilling hikes in the world. Enduring a 17-km hike that rises 700 m in elevation to reach Crypt Lake was a goal, one she admits  put her to the test mentally and physically. After reaching that peak, she feels she can overcome anything with God.  It also helped her show her kids it’s important not to give up when faced with adversity. 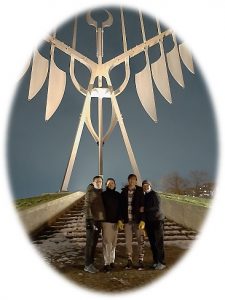 “God knows what HE is doing”